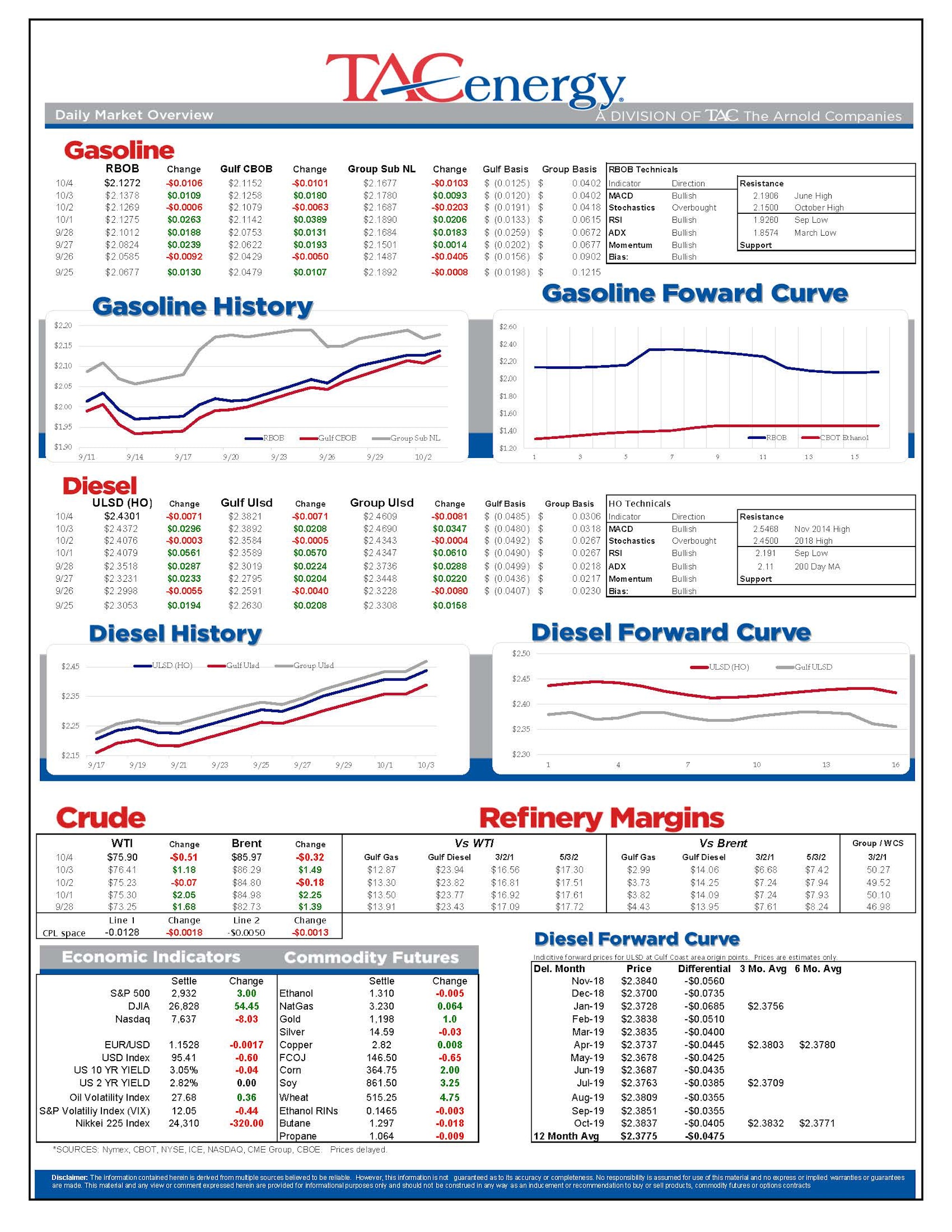 After a soft start to Wednesday’s session, energy futures rallied to end the day, with Brent, WTI and ULSD contracts all reaching new 3 year and 11 month highs. We’re seeing a similarly soft start to today’s trading but the sellers seem cautious as the oil market has the feel of a bullish freight train that no one wants to step out in front of. The EIA weekly report surprised many with a large build in crude oil stocks that initially sent prices lower, only to see buyers step in as it seemed those increases were driven by the volatile nature of the import/export flow for oil in the US.

Oil stocks had their largest weekly increase of the year, rising just under 8 million barrels as export dropped sharply, which accounted for 6.4 million barrels of the increase.

Refinery runs offered a bit of a surprise, with rates rising in 4 out of 5 PADDS, and showing a small net increase of 77mb/day nationwide despite the expectations for a busy fall maintenance season. As the Refinery Run charts below show, we are still on the early side of the seasonal maintenance window, so it’s likely we’ll continue to see rates drop over the next 4 weeks. Midwest (PADD 2) run rates reached their lowest level in nearly 2.5 years, while Gulf Coast (PADD 3) rates continue to impress, running nearly ½ million barrels/day more than they’ve ever done this time of year.

There’s a glut of gasoline inventory in parts of the US that’s just not going away. Total US gasoline stocks held above their 5-year seasonal range this week, with another counter-seasonal build in PADD 1 inventories largely offsetting declines in the other 4 PADDs. The excess along the East Coast may account for the relative underperformance of RBOB vs the rest of the petroleum complex over the past few weeks. The reason for the excess in gasoline inventories is easily explained by refinery output that is holding above the high end of its 5 year range, while demand is stagnating near the 5 year average.

The storm system moving through the Caribbean is still given a 30% chance of development, although forecast models suggest it’s likely it will make it into the central to eastern part of the Gulf of Mexico next week. That’s good news for the refineries along the TX Gulf Coast, but LA refiners will have to watch for a few more days.