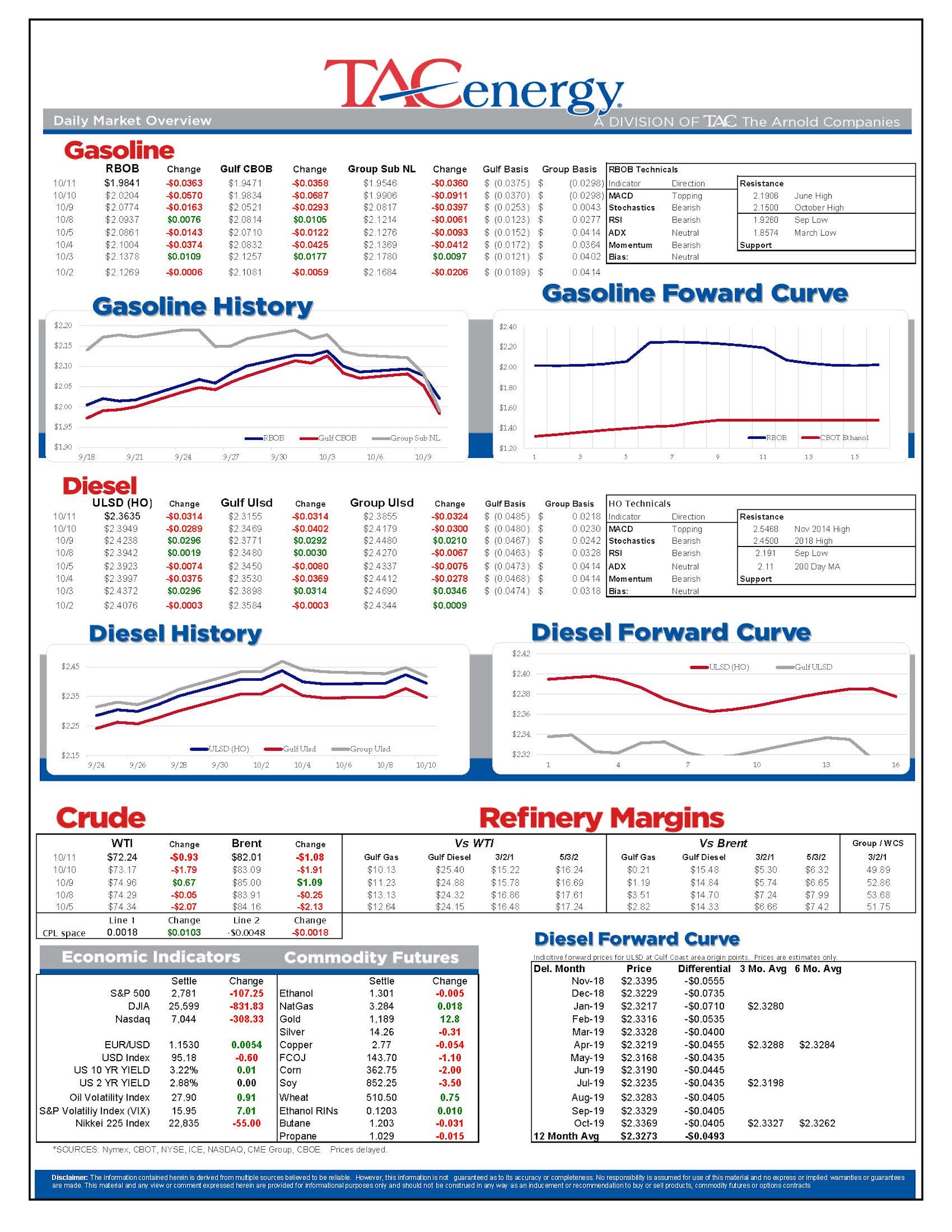 Panic Has Crept In To Global Equity Markets

For the first time since April a bit of panic has crept in to global equity markets and the ripple effects are being felt in the energy arena. The DJIA had its 3rd worst point drop in history Wednesday, wiping out nearly 2 months of gains, and several other indices have fallen below their 200 day moving averages for the first time in 6 months. Stock markets around the world caught the selling bug overnight and now US futures suggest the cycle may begin again today.

Energy markets have not been immune to the selling– as is often the case in a fear-driven market, correlations between asset-classes increases – setting up a pivotal test for oil prices to end the week. At this moment, both Brent and WTI are trading below the trend line that began almost 8 weeks ago, and if they can settle below it that would leave the door open to a test of the longer term trend some $5/barrel below current levels. If prices manage to bounce however, the past 2 days of selling will look more like an overdue correction for an overheated market, rather than a change in the trend.

The API did not offer any relief for energy bulls as it was reported to show a build of 9.7 million barrels in US oil inventories last week, along with a 3.3 million barrel build in gasoline stocks. If confirmed in today’s Columbus day-delayed DOE report, that would be the largest weekly increase in more than 1.5 years. Then again, last week’s DOE report showed a build that was 7 million barrels larger than the API’s report, so yesterday’s report could simply be the industry group’s data catching up to the government’s, and we may not see much of an increase at all today. We’ll find out at 11am Eastern.

Looking for a silver lining in the midst of the selling? The big declines have brought back the “Face-in-hand trader” one of the more beloved characters in modern headline literature.

It’s been a rough week for Canada Eh? With the country’s largest refinery closed due to an explosion and fire, Western Canadian Crude prices reaching 2 year lows at $27/barrel, then a major natural gas pipeline explosion that may cause power outages and refinery closures around the Pacific North West.

Those PNW refinery closures have sent prices in the region soaring, with RBOB values around Portland trading some 50 cents above NYMEX futures, which is dragging up gasoline values in California by 20-30 cents as replacement barrels will be needed from the south.

The damage assessments are beginning after the record-setting landfall of Hurricane Michael. While the damage is sure to be devastating in many ways, at this point it appears that the impacts to energy infrastructure are minimal.