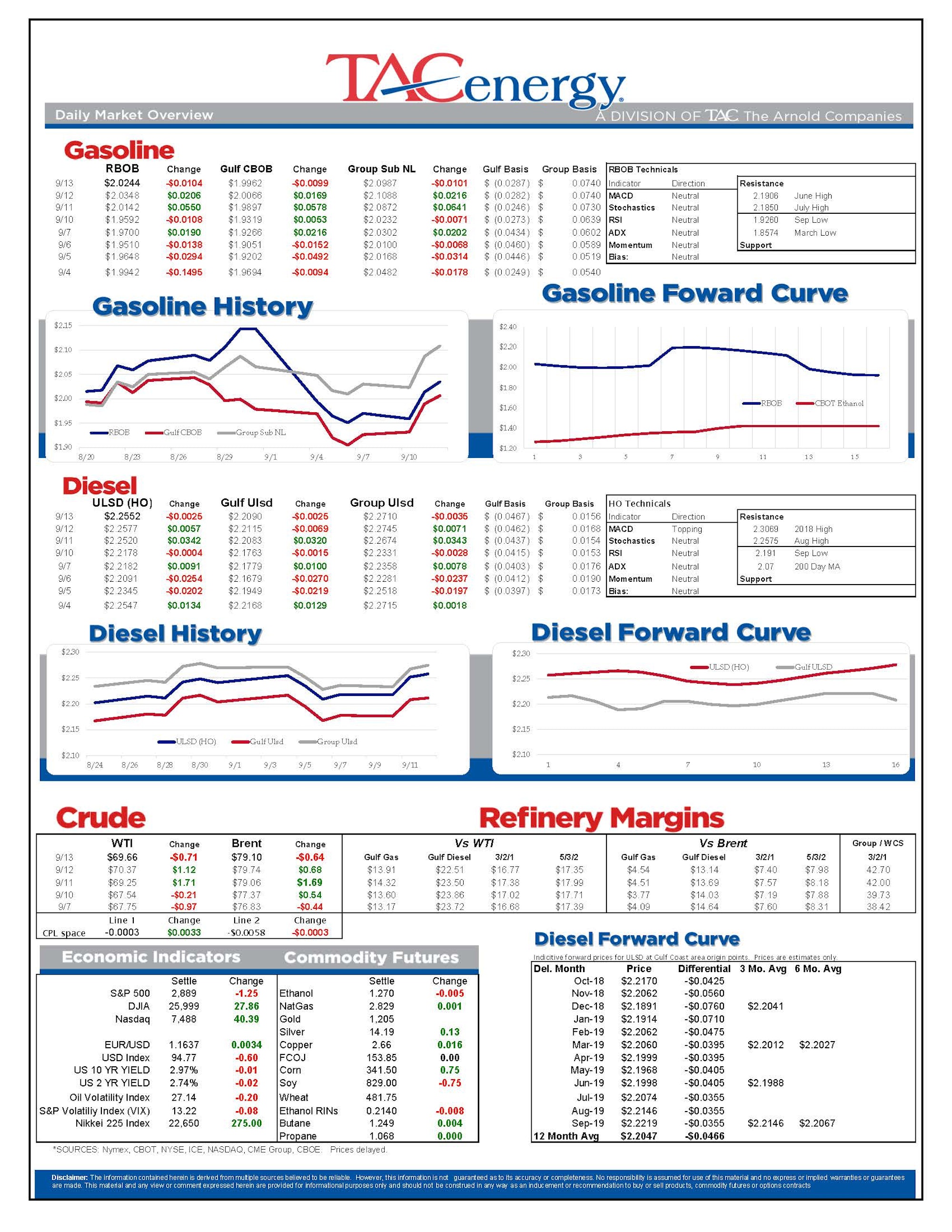 After 2 strong days of buying, petroleum futures are selling off to begin Thursday’s session following cautionary demand estimates from the EIA, IEA and OPEC in their most recent reports.

Several waterborne terminals along the East Coast have already shut as a precaution ahead of Florence’s landfall (believe it or not those big tanks at petroleum terminals can float or blow away so they try to shut down lifting with ample product to protect the integrity of the shell) and many inland terminals in the storm’s path are planning to shut down this afternoon. So far the pipelines continue to operate on a relatively normal schedule. If they can continue operating through the storm, it seems Florence is likely to have a bigger impact on petroleum demand, than it will on supply.

The picture below from the National Hurricane center shows storms named Florence, Helene, Isaac and Joyce, along with the disturbance known as Invest 95L heading for the Texas coast. That disturbance was given a 70% chance of developing Wednesday afternoon, but only a 50% chance now, but is still expected to bring more heavy rain to Corpus Christi and perhaps Houston which are already facing flash flooding. Isaac will need to be watched next week as it could still turn north into the Gulf of Mexico, while Helene and Joyce look like they’ll stay out to sea.

OPEC reported an increase in the cartel’s oil output last month, with gains from Libya, Iraq, Nigeria and Saudi Arabia offsetting declines from Iran and Venezuela. The cartel’s monthly oil market report also increased its global oil supply estimates for 2019 slightly, while decreasing its demand estimates, citing concerns over what the trade tirades may do to economic activity.

The IEA cited similar concerns about trade in its monthly oil market report, but held their demand estimates from their last report.

The IEA also noted that the world just set a record in August with global oil production surpassing 100 million barrels/day.

The EIA reported a sharp drop in total US Petroleum demand last week, with the diesel demand estimate reaching its lowest weekly level in more than 18 months. While 1 data point does not make a trend – especially with the fickle nature of the EIA’s weekly estimates – the sharp drop off in diesel demand could be an early warning sign that the US Economy could be slowing down.