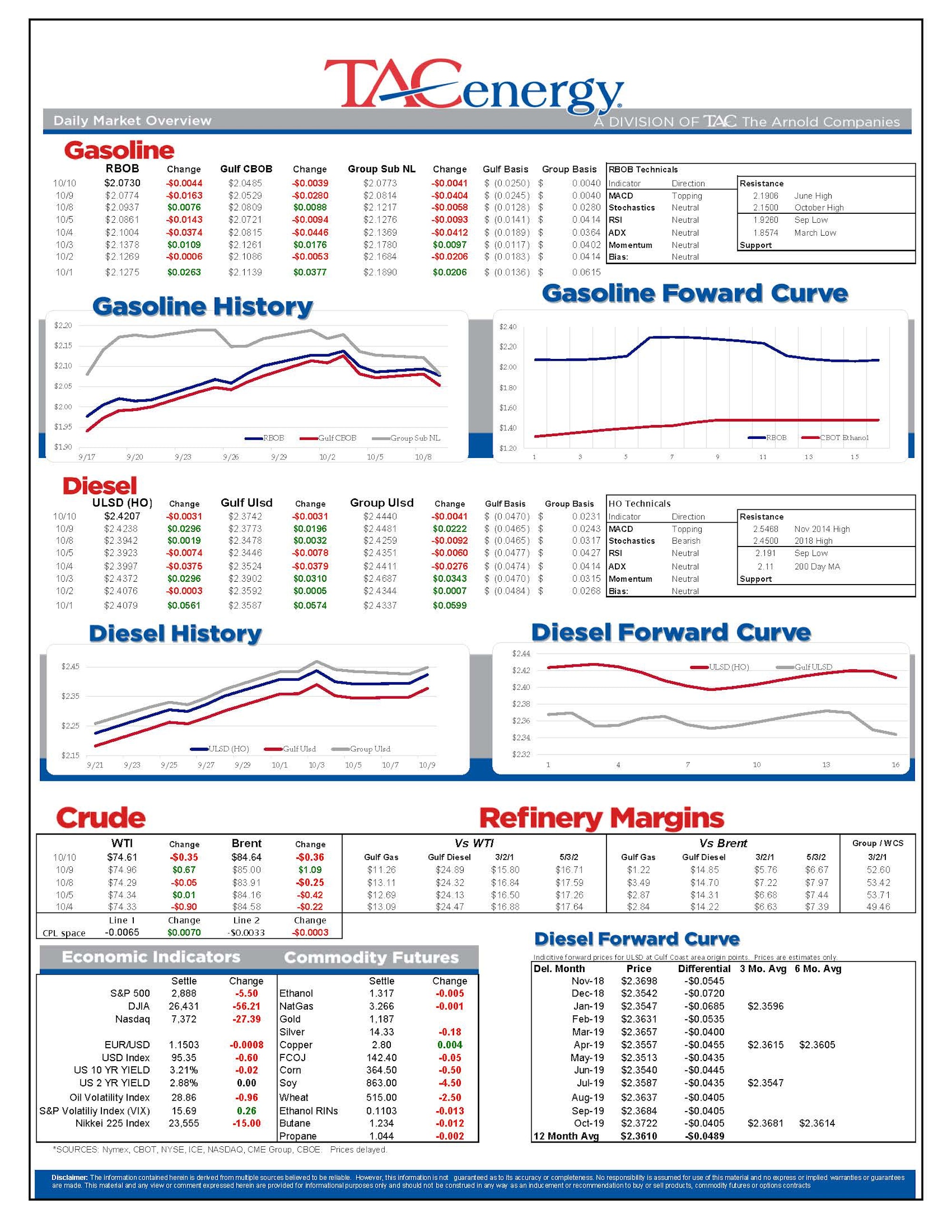 Energy futures are cooling their heels to start Wednesday’s session, after a strong move Tuesday put oil and diesel prices back within striking distance of 4-year highs. The Iranian stories that helped push prices up over the past few months seem to have taken a backseat this week as news stories closer to home have taken back most of the headlines.

Hurricane Michael grew to Category 4 status, and could be the strongest storm ever to hit the Florida Panhandle when it makes landfall later today. As the EIA’s interactive energy disruption map below shows, the storm passed far enough to the east of the oil production and refining assets in and along the coast of the Gulf of Mexico that energy supplies (or prices) should not be materially affected. Most of the marine terminals in the area began closing yesterday afternoon as a precaution, with the Panama city terminal under the most direct threat, while the marine terminals in Niceville and Freeport are in the relatively favorable position of being just west of the storm’s path which should (hopefully) minimize the storm surge effects.

The damage assessment continues at Irving’s St. John refinery after Monday’s explosion and fire. Gasoline markets seemed to have shrugged off the news since the fire was reported in a diesel-treating unit, and East Coast gasoline stocks are in ample supply. Diesel prices are finding some strength from the news as regional supplies were already at the lower end of their seasonal ranges, and if there was extensive damage to the hydro-treater it could be some time before the plant resumes normal ULSD production. That said, the largest supplier of fuel to several New England markets was at last report completely shut down, leaving state officials more worried about supplies than traders have been…so far.

The president told the EPA to waive RVP restrictions to allow year-round sales of E15 gasoline (no coincidence the announcement came on the same day as a planned trip to Iowa). Given the uncertainty surrounding engine warranties (aka lawsuits) with higher ethanol blends, this announcement may prove to be nothing more than an attempt to sway mid-term elections, but it does appear to have helped ethanol prices continue their pullback from multi-year lows, while RIN values continued on their slump as the prospect of more biofuel blending is bearish for the credits.